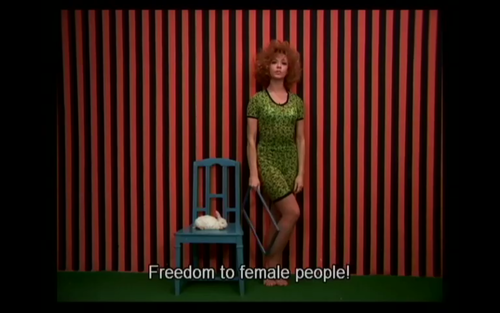 Milena, WR:Mysteries Of The Organism.

As a student I watched a lot of film…cunning old fox Lionel Miskin (the famed “Holman Hunt’ lookalike!) ran a free mid week cinema show at college that seemingly randomly showed movies that turned out to be a great history of the medium.  Amongst the recent releases (there were a few) one that struck up considerable discussion and debate was WR:Mysteries Of The Organism by Yugoslav director Dusan Makavejev.

Dusan turned up in Monuments Should Not Be Trusted that ran at Nottingham Contemporary through the early part of 2016.  Not that surprisingly given that a good deal of the show comprised film and video…some part of the ‘Black Wave’ and some plain documentary material.  And to a degree this was a weakness of such a substantial exhibition, far too much screen based works of substance and far too few really significant and good quality art objects.  Indeed in the front gallery much of the space was given over to the admittedly quirky and to a degree interesting ‘votive’ folk objects sent to the communist leader Tito.  Though curious and quirky there were far too many really.  As for the other material much of it had the same whiff of the ‘curio’ about it, frail and indifferent ‘student’ works that, of course, represented the developing politicisation of these ethnic groupings emerging as the various ‘Student Cultural Centres’ began to push back against the weakening power of Tito’s Yugoslav state apparatus but often derivative and weak both conceptually and visually as well as being occasionally rather shockingly naive and puerile.  Overall the film and video material was much the stronger element here but whether an art gallery, with small monitors and darkened spaces with poor seating, is a sensible context for it is rather more debatable.

For me, once again, NC seemed over precious and rather arcane.  In a more concentrated form, edited carefully and presented in the context of a broader based programme, this was a show of some considerable merit.  But the scarcity of punters tells its own story – this is very tenebrous programming…continuing the ‘grand projet’ that has characterised this venue since opening  viz. the aggrandisement of the Curator in search of career progression (achieved in the case of the first Director) and to hell with the audience.  Why on earth a Labour council puts up with it goodness only knows…ignorance and stupidity can possibly be their only excuse.

Surely the purpose of a large, publicly funded contemporary art gallery in the provinces is to bring a rounded, informed, educated and entertaining programme of modern and contemporary work to its location?  When I worked in a largish space in another large provincial city we brought in adventurous programming in its day – it was not without its critics…but we took a ‘journal’ view of the mix of shows.  Alongside a ‘difficult’ major new work by a relatively unknown but highly critically acclaimed international figure we would pit an Arts Council touring show of mixed new work that otherwise wouldn’t have shown up within a hundred miles of us and gave a small solo outing to one of the more talented ‘local’ artists.  NC could easily provide something similar and almost certainly pull in bigger and better audiences, that might enliven the place and bring in far more of the people who pay for it.